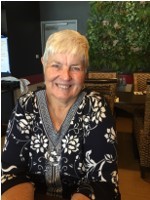 Val is nearly 68, a mother of three, a grandma of eight and a wife of 48 years. Retired now, Val was a farmer and rural physiotherapist. She holds claim to being one of the first acupuncturist physiotherapists in the public health system in Australia in 1988.

The diagnosis of dementia came as a shock to Val. “I thought I was too bloody minded to get dementia”, she says. She explains that she became suspicious that something was wrong “when I lost the ability to map read and became clumsy with left sided symptoms and chronic nerve pain”. For Val, a self-proclaimed, “adventure grandma, grey nomad and silo manager on a larger property”, she felt stunned to be “stopped in her tracks with serious brain fog by mid-2015” and diagnosed with dementia aged 63 years.

Val was familiar with dementia, having observed it for decades in locked dementia wards where she supported patients to manage their pain. “I hate being betrayed by my beautiful mind…I’m not reliable anymore, my intentions sometimes don’t match my ability on the day”, she says.
Whilst Val describes several noticeable deficits, she holds faith that her cognitive reserves gathered from being a farm kid are standing her in good stead.

Give me Grace to be a Different Me

“I’m not contagious, I’m still me”, Val states. Val is passionate about educating her community about how to integrate people with dementia into the community. She makes the analogy to Aussies knowing how to look after a mate who has had too much to drink. “Many aspects of my dementia mimic being a bit drunk – I’m loud, opinionated, repetitive, clumsy and may invade your personal space”, she shares. “Welcome me with a handshake or a hug. Keep inviting me to your activities as you did in the past. Be kind, inclusive, giving me grace to be the different me”, she says.

Navigating the Maze of Information

Val cautions that dementia comes with an avalanche of advertising and scams of false hope. She expresses gratitude for her scientific background, which has afforded her with the knowledge to examine sources critically. Val’s aptitude for speaking about dementia was noted in her online presence and conference presentations, and she was approached to join various research groups.

Get Involved in StepUp for Dementia Research

On StepUp for Dementia, Val says “It already has respect and gaining momentum to be the source of matching research projects with people. My experience has been positive. The research I, as well as my husband, have been involved in, has been positive. Being treated with respect and not as objects matters.” Val tells people to “Get involved – Australia needs you – enrol to not be rolled by an impending epidemic of dementia.”