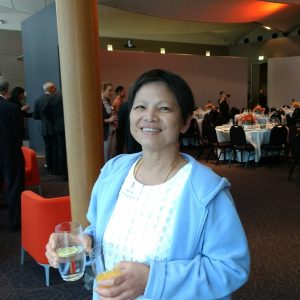 Mabel’s mother developed vascular dementia after a significant stroke, and a couple of years later her father developed Alzheimer’s disease. Both of her parents passed away within several months of each other. She describes the final years with them as being like, “life is on hold…that you can’t really go on holiday or too far away”.

Mabel says that she “never reached out for help.” She feels that Chinese people are less open to talking about dementia, and that many simply view it as an inevitable part of ageing. She wishes there had been greater awareness and support available to her family and that she “found it hard to get information, even from the GP or our Chinese nursing home … there was no-one to help us know what to do”.

A motivator to give back

Mabel became involved in dementia research a year after her parents died. She says “dementia is the worst disease… because they are not the same person anymore. After seeing my parents suffer that much, I became eager to help with the research studies, to learn more for myself, to understand the disease better, honour my parents, and to also give back to others.”

Mabel finds some research studies more interesting than others. She discusses her dislike of tick box “yes or no” questions. She prefers research where she is able to provide a more personalised or longer answer. She shares that she finds online research studies challenging and that face-to-face research sessions are easier, because she can ask questions and clarify what the researcher is asking. To that end, Mabel asks researchers to please “try to make questions simple and easier to understand; writing in simple English would help migrants a lot”.

Mabel says StepUp for Dementia Research “will make it easier for us to connect with the researcher”. It’s important, however, that there is publicity and, eventually, “translations for migrants who might not speak English.” She feels that, “unfortunately, most Chinese say “don’t worry”, someone will do [the research], but then it ends up that no-one does.” But, she says, “even though the cure may be years away, if we don’t do something it will never be found.”