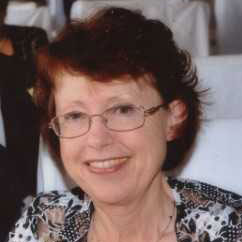 Imelda is an active dementia advocate, who speaks often – in the media, at conferences and universities – about caring for a loved one living with dementia.
She also volunteers in two aged care facilities and runs a support group for people and their families living with younger-onset dementia – dementia diagnosed in people under the age of 65 years old. Imelda was a carer for her husband, Graham, whose informal diagnosis of dementia in his late 50s was confirmed at age 64 years.

A journey of opportunities

Imelda describes her journey with Graham in his later life as full of opportunities for learning and creativity. While there was heartache and difficulty, she believes that dementia need not be a sad story. “Hidden within a horrible day, there might be a wonderful gem…an “a-ha” moment when it feels amazing,” she says.

Don’t do it alone

For Imelda, the most crucial thing is to not try to go it alone. To get the best possible outcome for your loved one, she advises to getting as much support as you can. Describing herself as a “fairly private person” before Graham developed dementia, Imelda learned that it “doesn’t pay to hide in a corner and shrink away”.

Participating in research gives so much

Imelda explained that it was initially a joint decision between her and Graham to participate in research, to give purpose to Graham’s experience and to help others with theirs. Imelda shared how “enthralling and exhilarating” it is to be in the research environment. She said that she finds it “uplifting and affirming” to have conversations with people who are the frontiers of dementia knowledge. Participating in research feels almost like socialising, she said, because it provides a sense of belonging in an otherwise potentially isolating journey.

The biggest surprise about research for Imelda was that her input was valued. She says that anyone who worries they might be too boring or have nothing to contribute to a study should remember that they “present the human face of the condition” – whether it be as a person living with dementia, their carers or their loved ones. Participating in research can be as busy or as non-busy as you choose to make it, she said, and you can drop out of the project at any time.

Imelda asked researchers to be aware that you have no idea about what is going on in the background for a support person for someone with dementia. “If we take a while to get back to you, it is not that we don’t want to engage …we just have a lot going on.”

On StepUp for Dementia Research

“What a brilliant idea…it will transform researchers’ abilities to harvest data,” says Imelda.