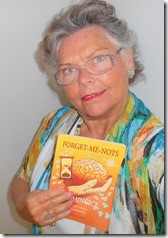 I first became aware of dementia research at an Alzheimer’s Australia conference some 10 years ago, when a Consumer Dementia Research Network (CDRN) was formed. There were about 25 people, with Glen Rees and his team. Many were people living with dementia, and others were, like me, carers/enablers. I was totally speechless, as I did not know until then, that it was possible for people living with dementia to be so articulate and independent despite the diagnosis. I was the only one with a culturally and linguistically diverse background, and my mother, who had dementia, did not know any English. Ever since that conference, I have been a fervent advocate for participation of people with culturally and linguistically diverse backgrounds in dementia research.

When StepUp for Dementia Research was created, I saw great potential for better communication between us, consumers with lived experience of dementia, carers/enablers for people living with dementia, and researchers. In fact, all members from the original CDRN were properly trained and educated in how to be involved in research and how to work well with researchers. I have worked with over 30 different researchers over past 10 years, on many different projects. Forming great friendships, having my name appear on researchers’ published research findings, and gift cards and flowers sent to me in appreciation for my involvement. For those researchers who have not as yet registered with StepUp for Dementia Research, I urge you to do so without delay. You will get numerous new participants who care about dementia research just like you do, and will work with you towards better prevention, improved care and one day, a cure.

What is still lacking is the willingness of most researchers to get participants from other backgrounds and with poor English, to participate. The main barrier is often money; but we all know that the research team decides how to spend the grant. If a small portion, of it is dedicated to enabling people with culturally and linguistically diverse backgrounds to participate, the results will be far more valuable and valid. How will research projects that ask about: what carers need, stigma about dementia in our communities, the Mediterranean diet and dementia, or any other types of studies have valid results if some 30% of population are excluded from such research studies?

The life of caring for someone living with dementia who also does not speak English is twice as difficult when it comes to getting services and respite. There are not enough bilingual workers, and many English-speaking workers may not have had training on where to find Cultural apps and tools, interpreters or translated material. The life of a person living with dementia is twice as difficult too, when that person reverts to their mother tongue and loses capacity to communicate with family and friends. In some cultures, where there is stigma around dementia people can be afraid of admitting that a loved one has been diagnosed, as it may be regarded as God’s punishment or even result in them keeping the person locked at home. Hundreds of other topics are just waiting for you, the researchers, to look into and find the answers.

Sign up and use StepUp for Dementia Research. It is a Bridge between researchers and willing participants, as well as those who wish to be involved. one step further to advance research for better dementia prevention, diagnosis, treatment, and care.